Make me a commune

I love that show on TLC, Sister Wives. It's about a modern day traditional Mormon family where there's one husband and four wives. I guess they're not actually Mormons anymore, since their church doesn't recognize polygamy, but they're part of a church that considers itself Mormon....or something. I don't know or care about all of the theological disagreements. But I digress.

I love it because of the community. I feel so overwhelmed by my to-do lists sometimes that I think a few extra "sister wives" would rock. Although, a few brother husbands might be nice for the heavy lifting. The women on the show are pretty good at that sort of thing too, though, so either way I'd be good.

My daughter hates the show and thinks it's strange that I like the whole idea. Yesterday she told me that she's figured out why I am attracted to the concept. It's my fascination with the nun/community lifestyle. I've often talked about how I could easily see myself as a Sister (and I wasn't raised Catholic. I'm a free spirit when it comes to religion, so the authority thing would definitely be a problem for me. It's all about the connections with other women).

Some of my best friends who also have kids with disabilities have talked in the past about a commune type of living arrangement where we all help each other out. I could so go for that. I feel isolated so much of the time. I really long for some additional companionship and help. It doesn't bode well for me that I'm also an introvert who sucks at maintaining friendships that require me to venture out of the house. I'm in a catch-22.

Seriously, though, I am feeling extra introspective lately about the future. Myself and my kids have "big ones" coming up in the way of birthdays. I'll be 50 in a few months, Daniel 13 and Melody 16 in December. I am starting to find it hard to sustain the energy for everything that needs to be accomplished in a day. Full-time work, nursing Rich back to health, therapies for Daniel, piano for Melody, shopping, laundry, cleaning....

I don't have an answer right now. Just vague images and longing for a large house split into apartments like the original home the TLC family had (they had to leave Utah when their show put them in the limelight and the authorities started making threats. Now they're in Vegas living in separate houses).

Since there's a fat chance of that ever materializing, if you have other suggestions, I'm all ears. And I'm serious. Mostly.
Posted by Carolyn at 6:33 AM 4 comments:

I firmly believe that nature brings solace in all troubles. ~ Anne Frank


I agree. Today was a beautiful, sunny, invigorating fall day. I spent it with Melody and Daniel at the zoo. 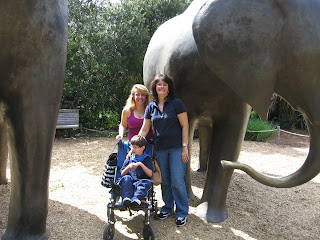 After months of chemo, radiation, CT scans and surgeries, Rich got good news last week. He still has to have a PET scan in December, but for now it looks like the treatment is doing it's job. The cancer in his throat is gone, and the lymph nodes in his neck that were affected are shrinking (and will continue to do so according to the oncologist). I am thankful.

So today I took some of that "take care of yourself" advice that I've ignored since July, and spent it with two of my favorite people on earth. My kids. Rich still isn't strong enough for a big outing like this, and truthfully, he'd rather watch football. So, as we have for so many years thus far, the three of us ventured out and had a really beautiful day together.

Time for me to hit the pillow now. I should sleep well tonight!
Posted by Carolyn at 6:51 PM 3 comments:

Over ten years ago I read a book that opened my eyes to something I hadn't thought about when considering Daniel's needs. I'll get to that in a moment, but first let me tell you a little about the book and it's author.

'Does She Know She's There', was written by the mother of a girl with a severe disability related to cerebral palsy. There are plenty of personal memoirs out there regarding kids with special needs (and I have a bookshelf full), but this one stands out. 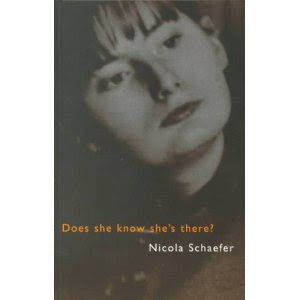 Nicola Schaefer was ahead of her time. She gave birth to her daughter Catherine in 1961, about six months before I was born. In those days parents were strongly encouraged to institutionalize their kids with disabilities, and she got that speech along with the advice to go home and have another child right away. I loved her response to that doctor, a deadpanned, "What are my chances of having another dud?"

She kept Catherine at home and raised her alongside the two boys that came later. There were no services available to help her in day to day care back then. Nicola was inventive and optimistic and effected change by connecting with other parents and becoming a disability activist in 1970's Canada.

I wrote her a letter when I finished the book, and got a phone call in return. She's a funny, smart Brit and she inspires me to this day. Currently, her fifty year old daughter lives in a home that she's shared with friends for twenty-five years. There's always a full-time caregiver living with her, often a friend or relative. So much for institutions, this lady showed us all how it's done!

The sentiment in the book that continues to grab my attention the most is the need to create a network of friends for our kids. That's an issue I hadn't thought much (ok anything) about at the time. It resonated with me, even though Daniel was very young. If I don't work at the introductions, his typically developing peers aren't going to know him.

Recently I read another book by another mother, Sharon Dzialo, and it made me think of Nicola and Catherine. Sharon's son was injured in a near drowning accident the year that Daniel was born. Her book, 'Ceramic to Clay', details a lot about the efforts she and her husband Phil make in providing therapies to benefit Adam. She also wrote about her desire for Adam to have a friend (she expresses it beautifully through his voice in the chapter Adam's Ode).

I've been lax in the years since reading 'Does She Know She's There'. I took Daniel to an inclusive Sunday school class with kids his age, and I worked with other moms at his elementary school to be sure his class was included in activities in a similar way. Over time, though, I've gotten lazy.

Sharon's words brought to mind Nicola's and I feel the need to start acting on them. How do I go about it? When Daniel was about 4 years old I asked a neighbor if her son would like to come over to play with Daniel a couple of times a week. (I was trying to follow my mentor's advice.) I was rebuffed and I guess my skin is a little on the thin side, because I never really got over it. It kinda chapped my ass, as they say, but it's time to move on.

At thirteen, the boys in Daniel's peer group can't drive yet. I'm thinking of starting by seeking out guys a good ten years older than him so that he can attend things like football and baseball games. Sort of an older brother scenario. So yes, I'm considering the Big Brothers program. I'm a little hesitant to call them, because I don't know if they've ever served someone with a disability as severe as Daniel's before.

I just don't know a lot of twenty-somethings. Naturally I want to find someone with maturity and an open heart. All I know is that now is the time to begin. I think I'll ask a few of my friends to keep me on my toes by asking how it's going every so often. Accountability always helps when it comes to keeping me moving.

Email ThisBlogThis!Share to TwitterShare to FacebookShare to Pinterest
Labels: Disability Friendship
Newer Posts Older Posts Home
Subscribe to: Posts (Atom)
Know that the purpose for which each soul enters a material experience is that it may be as a light unto others.

Carolyn
I am a nurse, writer and mother of two whose youngest has disabilities related to microcephaly. This blog is a glimpse into our lives.

Every human being is going through a soul experience, no matter where he is or what sort of a body he was born in. ~Gladys McGarey, MD

Do not assume that a soul which has incarnated in a body which you call limited has not reached its full potential, for you do not know what that soul was trying to do. You do not understand its agenda. You are unclear as to its intent.
~Neale Donald Walsch