A year of blogging

It was a year ago today that I started this blog. It was in March that we started having frequent daily help with Daniel for the first time ever. It was spring break, just as it is now, and I was enjoying my first year working for the public school system as a diabetes clinic nurse. Life was definitely getting simpler.

A few months later, my husband and I no sooner celebrated a year of marriage and he was diagnosed with cancer. There have been some rough days since last July 7 when the docs told him his sore throat wasn't an infection. But he is now cancer free. Not pain free, not able to eat yet, but the cancer cells are gone. On Thursday he'll have another surgery to remove areas of his jaw that the radiation damaged.

Once he recovers, the hope is that he'll be able to eat again with a jaw that doesn't hurt. That's the prayer.

There is a lot to be grateful for this spring. I took Daniel to the beach on Sunday and as we strolled I thought about just how much we have to be thankful about. 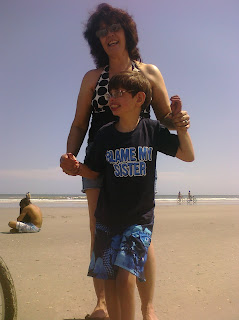 It's easier for me to be happy when he's smiling.
Posted by Carolyn at 4:53 PM 2 comments:

Email ThisBlogThis!Share to TwitterShare to FacebookShare to Pinterest
Labels: Spring

Dealing with the Rebel Yells

In 2010 we finally got on the state waiver for disability services. For the first time in over a decade, Daniel got some help with his daily stuff from someone other than me. I know he needed a break from my tired old self, and I needed to rejuvenate so as not to become a complete slug.

So, we began to separate a little bit. I took a few weekend trips, always no more than two nights in a row. The caregiver told me that by that second morning he would start to crank up and let her know that he was ready to get back to his usual routine.

Last week we got a new care provider. It happened suddenly, but I guess it was time. Our new person is a bit, shall we say, lethargic? Mama's not diggin' it.

Tonight I started thinking about what it would be like if Daniel were just a little more well behaved when we're out so that having someone here isn't such a big necessity. After all, he's gone pretty much everywhere with me his whole life. In the very early years, I didn't care if he yelled in church, or squealed in restaurants. With time I did care. I just handled it.

I would take him out of whatever building we were in, walk with him, put him on my lap, massage the sides of his mouth (did this vigorously on an airplane a few years back when he was doing his Rebel Yell at the top of his lungs). But I always remained committed to having him included in almost everything we did. Movies, nights out to hear Rich play, swimming, parties, church, whatever.

My parents helped me in this. They don't lose patience with Daniel when he gets antsy and starts to loudly whine or let out a scream. It's easier for me to roll with it when they're around. Unfortunately, there's about 1,000 miles between us, so those times are not often enough.

Lately I've felt that I'm just done. I don't want to struggle with him in church or leave him sitting in a nursery at age 13, so I don't go anymore. I've gone out to fewer and fewer restaurants and public places with him. The other night we all went to a movie, and I tried everything to keep him happy until I just left early and sat in the car.

Tonight I talked to him for a long time as he was falling asleep. Edgar Cayce called it pre-sleep suggestion, and I've used it a few times on myself. Sort of a hypnotic kinda thing. I gently repeated over and over that he goes with me to public places and he's happy and quiet. I talked on about specific places and also threw in that he walks well when we go out together (he can walk, but prefers to be pushed in his wheelchair),

I don't want to drag him places that he doesn't enjoy, but I really think it's better for him to be out with us as he has been all of his life than to sit at home with a half-asleep body he's not related to (when I fall asleep it's different.) Yes, we need reliable help, but I don't want to feel so desperate to get away without him.

His sister thinks maybe it's part of being thirteen, and that all kids his age are pains in the ass. That's probably partially true. But we've been dealing with sudden outbursts of noise forever. It's like an alarm clock that goes off randomly. I think he can learn to control it with enough encouragement. Or maybe I'm just dreaming. Either way, it can't happen if we don't try.

Here's the video I made when he turned twelve. That boy is my heart. I want him to have a good life.

Email ThisBlogThis!Share to TwitterShare to FacebookShare to Pinterest
Newer Posts Older Posts Home
Subscribe to: Posts (Atom)
Know that the purpose for which each soul enters a material experience is that it may be as a light unto others.

Carolyn
I am a nurse, writer and mother of two whose youngest has disabilities related to microcephaly. This blog is a glimpse into our lives.

Every human being is going through a soul experience, no matter where he is or what sort of a body he was born in. ~Gladys McGarey, MD

Do not assume that a soul which has incarnated in a body which you call limited has not reached its full potential, for you do not know what that soul was trying to do. You do not understand its agenda. You are unclear as to its intent.
~Neale Donald Walsch